I recently gave into the Downton Abby buzz which resulted into severe binge watching. The episode where Lady Mary chops her hair into a sleek bob is one of my favorites.

Throughout the rest of the series she rocks it fiercely yet the neckline continued to horrify me in every episode. Knowing the show is strict with the historical accuracy I decided to research …. Why such a frumpy and overgrown neck line?

The episode, set in 1924, was a time where cutting off your hair for a women represented a symbol of female sexual and social liberation. While self described bohemian women had been doing it around the turn of the century it was a huge step for mainstream ladies.

In the 1920’s there were not hair cutters for women.  Ladies would have to enlist a girlfriend to chop their locks into this precision cut…. Hence the wonky neckline! Male barbers did not know how to cut women’s hair nor were women allowed in a barber shop. It would have been very rare for a male hairdresser ( as they were all men) to agree to cut Lady Mary’s hair. 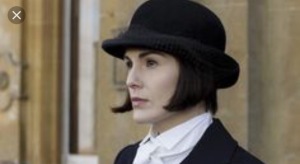 This cut is still a tough one for the most experienced stylist with all of our current tools. Back then most hair was cut with a straight blade… And honestly they were just working out the kinks.

While Lady Mary was fictional I would like to thank all the brave pioneers who put their nose up to tradition!